Trading Reversals – The Course of Actions

Trading Reversals is a Forex technique, used in the cases when a trader opened a deal on a trend, but the latter soon reversed. In fact, this is an addition to the main trading system. Many market participants consider this method inexpedient, but it's up to each to decide, we'll just tell you how it works.

The Forex market is affected by many factors, both external and internal. For example, the entrance of a large investor can "pull" the trend in the opposite direction or create a new one. As well as very loud news from the Eurozone can do it. In such cases, traders who opened a position in a false, as it turned out, side will resort to trading reversals.

In fact, having opened the order, the trader hopes to see the continuation of the trend. If the latter changes dramatically, the transaction closes on the Stop Loss at a loss. But, successful traders understand that the trend continued in the market in another direction, and they decide to "reverse". Then there is a real chance to cover the loss and even get a profit.

Before describing the conditions of the strategy, it is necessary to clarify what the "Stop" and "reversal" is. The first term means a usual Stop Loss, the second - implies an order with Stop Loss and Take Profit. When the transaction is closed through a Stop Loss, immediately open the position in the opposite direction (in the direction of the trend).

This system is reasonable to use for situations where one strong trend is replaced by another, no less strong. That is, there must be a strong price momentum. However, this is one of the spin-off conditions. In fact, the main task of the trader who uses this method is to foresee the moment of the reversal, and not to measure the strength of the trend.

When a trader sees that an open transaction does not yield a profit and the trend, in principle, fades, he will decide to set a "reversal". This transaction should be opened right behind the  Stop Loss, where the unprofitable position closed.

An example of order reversal

Suppose, at point 1 you opened a Sell-order. At the same time, the Stop Loss and Take Profit are installed. But, after a while, a new trend suddenly arose, in connection with that your position was closed by a Stop. You suffered a loss, but you can fix it.

Right after the price reached the Stop, open the Buy order. It can be seen that after that the price went up, and you cut losses and made money. 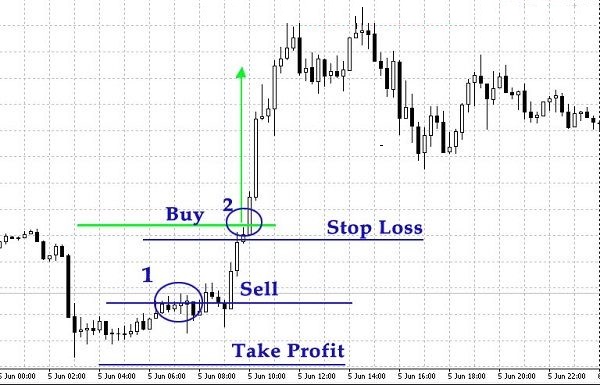 Connections of reversals with locking and martingale

Even after a brief description, the similarity with locking is noticeable. But, in this case, two differently directed transactions do not remain active - one closes, and then the second opens. Trading Reversals involves fixing the loss on the first order and instant opening of the second position. Lock is the opening of the second order, as soon as the opposite trend begins to strengthen, without canceling the first one.

The difference is still in the psychological approach. In reversals, the amount of the loss is seen according to the first order, on the basis of which the trader realizes how much he wants to earn. When locking - how that goes.

You can still use martingales. This system was invented for playing roulette, but on Forex it is also popular. The bottom line is to place every opposite transaction with a double volume.

The need to use trade in reversals

Reversal orders are a kind of insurance, smoothing the loss. However, the opening such positions should be very cautious, because if you go wrong again, you will lose much more money.

Proceed to actions only after receiving a strong signal about the turn or the emergence of a new trend from the indicator. We recall that Trading Reversals is an addition to the main strategy, so that technical tools should be applied accordingly.

Also, the method is suitable if you trade from breakdown, and the first breakthrough was false. 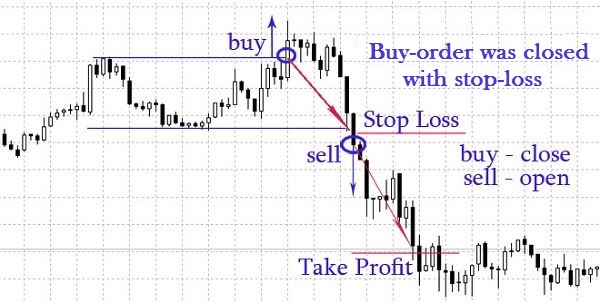 Focus on the conditions of the main trading strategy. If reversals are acceptable, then do not delay with the opening. But, if you understand that this will bring losses, you do not need to be taken in by the statement that you will cover the losses. Decisions must be weighed.

A Forex strategy is an algorithm for profitable trading in the currency exchange, but it is not a 100% guarantee of getting profit. So, think about your actions in advance, testing the trade on a demo account.