The Fractals is a technical indicator that allows you to determine and evaluate the top or trough of the price chart, considering an asset. Below we will discuss the application mechanism for this trading robot in details. You can download the latest version of the Fractasl indicator on the MTDownloads website for free.

Any trader who sets a goal to earn money steadily on the Forex market, will understand, sooner or later, that the key to his success lies in forecasting. In general, this is so logical: to open a deal, you need to be sure of its outcome. And it becomes possible only after a thorough research of the trading platform - beginning with the structure, and ending with the current price level position.

The currency exchange is in the range state for most of the time - this is the period when the price moves chaotically, there's no particular direction or range. Of course, at that point the forecasts are ineffective. Traders are activated in the 15-20% of the time left when they can trace the market trend and anticipate the further price behavior more or less.

Depending on the situation prevailing in the market, traders use either trend or oscillator indicators. The first group of tools is used for Forex technical analysis in flat; the second group is used to highlight the trend and its boundaries. Trend indicators show the most optimal moments for the transaction opening, while the analysis of a "quiet" market is made primarily to predict the nascent trend. Flat trading is not recommended, since operations opened during small price fluctuations, bring only losses usually.

Each trader chooses, which technical analysis tool to use in the strategy, by himself. You can understand how effective the indicator will be for you, only by testing it. You can check the full list of trend and oscillator indicators, as well as download the trading robot for free, on the MTD website.

The Bill Williams' view on the trade, and the appearance of fractals

A big contribution to the Forex trading system was made by Bill Williams, who contributed to the technical analysis of the currency exchange a lot. He suggested the theory that for successful trading it's not necessary to analyze every transaction and spend a lot of time working on the graph. The author considered it wasted time. Mr. Williams argued that success will be achieved by the one who trades blindly, and also the one who understands how the market works from the inside.

To support his strategy, the trader has developed some indicators, one of which is the fractal indicator. Today, this trading robot is available on the Internet, and you can download it for free on the MTDownloads website.

At the past, the fractal theory caused a violent reaction among traders, since the first presentation was accompanied by large volumes of scientific terminology. However, soon the trading participants agreed with its effectiveness, and today fractals are among the most important instruments of technical analysis.

Trading on fractals is often combined with the Alligator indicator, which was also developed by B. Williams. The author himself recommended searching for local maximums or minimums of the market.

What is a Fractals indicator 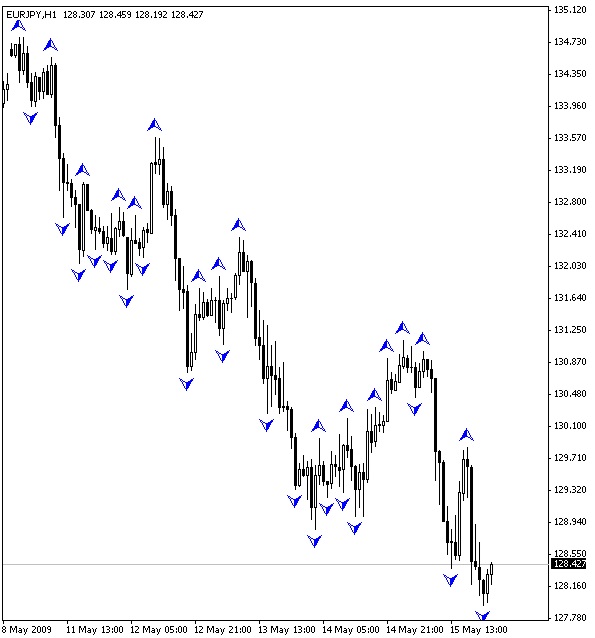 There are two types of fractals: a fractal up to and a fractal down.

It also should be noted that the framework for the fractal designation is slightly blurred. For example, it's not necessary to have exactly 5 bars - there may be more of them. Also, it's not required that the bars should be lowered or increased, respectively, from the high or low. The following bar combinations are the Williams' ones too. 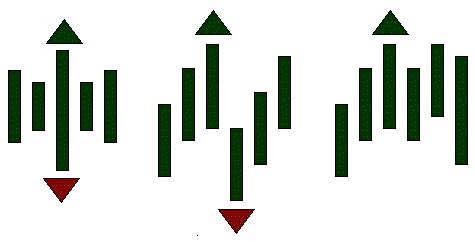 The author of the indicator also drew attention to the fact that, if two bars with identical maximums were formed, the second maximum shouldn't be taken into account trading on fractals. The same situation is with the minimums. The reason is the fixed level, and re-reaching this mark won't be significant in the analysis.

How to apply this technical indicator

The Fractals trading robot is simple in use, but its value is high. It seems difficult to determine the maximum and minimum prices, especially when the level is intermittent and dynamic, as well as when a short time frame is considered. The indicator will accurately determine where the price reached its apogee, and when it fell again.

Due to the Fractals, buyers are waiting for the price to rise beyond the established fractal by at least one point. It is important for sellers to wait until the price drops below the arrow. At the appropriate time, there is an explosion of market participants with the relevant transactions.

Increasing demand or supply is a strong signal to trade. A buy order should be placed a little higher the up fractal, and sell better at prices that are below the down fractal. To get more accurate signals for transaction opening, the author himself recommended using the Alligator indicator too - it can also be downloaded for free on the MTD website.