Now we'll talk about the most famous of the indicators, which shows the average value of a financial instrument for a particular time. The determination of a moving average means averaging of indications in a given time range. Also, the moving average helps smooth out minor fluctuations. 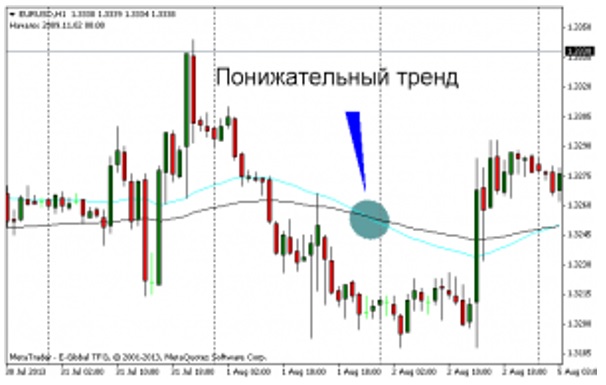 If the MA with an interval of 50 crosses the second one from bottom to top, this means that the short-term trend is upward; the top-to-bottom intersection means a downward trend. In such a situation, the value and the period may vary. In the second case, the MA is used as the initial stage of this trend. In such a situation, it's assumed that the moving average will be the starting point for the trend. Here it's worth to wait until the price will significantly advance either upward or downward. You can see on the graph below, how the progress of three hundred points indicates the beginning of the trend. 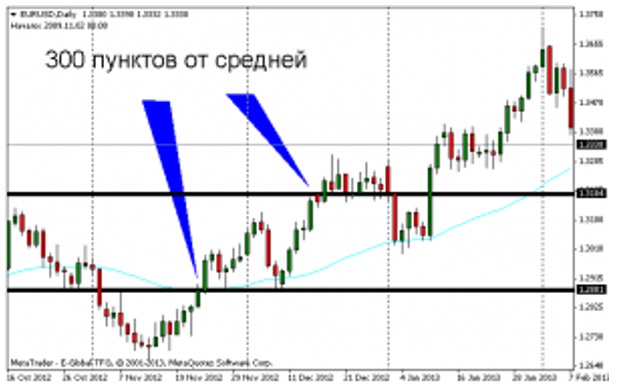 The last of the most common methods using the WMA is the use of resistance or support. This method is the most reliable. To use it successfully, it's necessary to carry out certain actions. First, you need to find a certain trend. Then you need to wait until the price correction occurs, which will be seen by the touch of the MA, and then enter the market in trend direction. The described scheme is indicated on the graph: 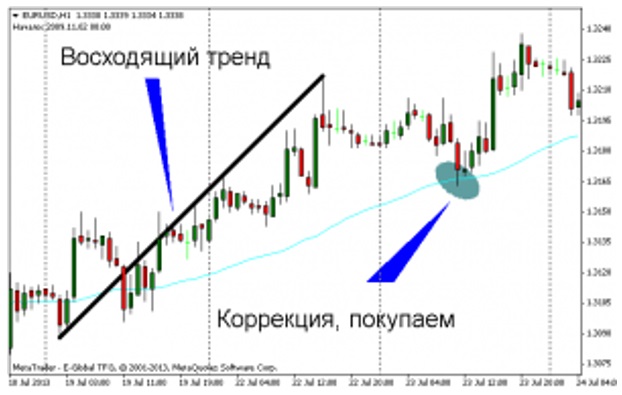 Advantages and disadvantages of the weighted moving average

Taking into account the fact that the last value is the most important for the WMA, it's best to use them in short-term and medium-long strategies. Used in long time periods, the indicators will not be that clear. The main advantage of the WMA is that this indicator notices any changes in the asset trend much better. The disadvantages of the WMA are:

Features of the weighted moving average

Originally, the WMA was created to eliminate the shortcomings of the previous versions. Previously, it was taken for basis that the price doesn't change for a certain period of time. However, it's clear that it's not so. The WMA was created exactly to give the weight to the values. The main function of this average is to signal a change in the market situation. If the value of the price is higher than the average one, it's worth to make a purchase, and with the lower value – to sell. It's also worth to remember that two or more moving averages should be used for the more clear indications.

The first simplest signal given by the moving average is its intersection with the cost. If the cost is above the average level, it means the trend rises, and if it's lower – the trend goes down. When the price has crossed its average from above, it is a signal for an increasing trend to appear. Such signals are often false, so the additional filters are necessary. This is due to the rapid movement of the MA. That means that the intersection occurs, but after a while, the averages intersect back. Further, the call to action is their intersection. In such a situation, the "fast" average, which crosses the "slow" one from the bottom to top, will indicate the change towards an upward trend. If the opposite situation has occurred, it means a signal about the trend moving into a downward status.

Making a conclusion, we can say that the weighted moving average is a very convenient indicator to use. Despite certain shortcomings, this indicator must be considered an indispensable assistant when the price control is necessary in the short and medium-term trends.