Price Action is a pattern of a graphical analysis used in the no-indicator Price Action trading model. This is a candlestick (or bar, depending on the type of chart chosen) with a very short body, as well as one short and a second long shadow, so-called "nose". The more the nose stands out the background of other candlesticks, the stronger the signal. A Price Action with a long tail appears before the market turns.

A pattern is formed when the price of the candle moves in one direction first, and then returns back close to the opening price. It forms a long tail and a small body of the pattern. You can download free indicators for the Price Action and other patterns, on the MTDownloads website.

A Bit of History

The pattern and its individual parts are associated with Pinocchio - the hero of the eponymous book of Carlo Collodi. In a fairy tale, a nose of a wooden boy grows as soon as he lies. By analogy, the tail of the pattern grows, showing how many traders were cheated by a price passing a considerable distance, and then returning back. Roughly speaking, seeing the price movement, traders began to open deals, but then the price returned back - this is the main trick of the Price Action. In fact, to avoid such situations, traders prefer to use programs that identify patterns. 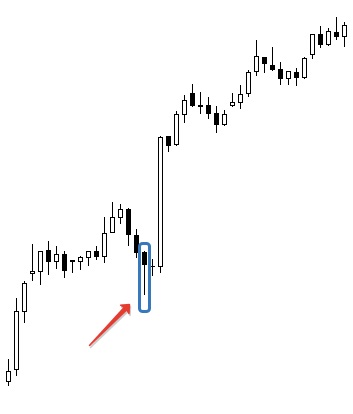 Popularity of such a setup came as a result of information about it on the Forex Factory forum. Some forum member with a nickname James16 actively published explanations about the pattern and taught traders how to use it. Before that, the Price Action was featured in Martin Pring's work, but this was an insignificant event for the pattern promotion among the participants of the foreign exchange market.

Features of the Setups

We have already said about the nose and tail of the Price Action, but in addition there are eye patterns - these are the two nearest candles on each side of the figure.

The peculiarity of the Price Action is that it cannot be an internal bar. It must meet several requirements, which are taken as the basis for indicators that identify such a pattern:

When Price Action appears, look where the nose points and open the transaction in the opposite direction. In this case, unlike many traders think, the color of the body doesn’t matter.

If trading on Forex was a simple thing, the market wouldn’t receive such different feedbacks. Therefore, no matter how simple the work with Price Action seems to be, you don’t need to trade on all the patterns. Choose only the best patterns and take into account not only the tail, eyes and other parts, but also the location of the figure. Selected signals will become a powerful clue to enter the market.

Opening the orders, select the horizontal support levels (for example, supply and demand, price, pivots, etc.). The stronger the support, the more confident you can enter the market.

An excellent strategy is to trade these figures in the direction of the trend, since opening the orders in the direction opposite to a correction or reversal of the trend is ineffective. During the minor price changes, it’s recommended to consider Price Actions with wide price channels. If these are no such patterns, rely on patterns that have made notable movements. It's good to trade setups that have a nose longer than body and nearest bars. We think that the smaller the body of the pin bar, the better it is.

It’s not so difficult to find the patterns at a price level, and usually even novice traders perfectly cope with such a task. To automate the process, download the indicators that search for the patterns on the MTDownloads website.

The Price Action non-indicator strategy is quite popular in the world of trading. This is a simple strategy that can be used to trade any currency pairs on timeframes from H4 and higher. Choosing shorter time periods, you risk getting low-value patterns. It’s quite illogical to trade on the M1 period, since in this case the pattern will be rather a market noise, and not a signal for any trading actions.

Ways to enter the market:

The latter two methods are somewhat confusing and used by experienced players who are not afraid to take risks. The first option is acceptable for traders of any level. In general, it's very easy to trade with patterns, especially if you use special indicators for the Price Action system. MTDownloads presents the latest versions of the most popular indicators of such a group, which can be downloaded and installed for free.