Pivot S/R is a tool for the Forex market analysis based on the Pivot levels - the most significant levels of price fluctuations, which act as the support and resistance lines. Since most traders prefer trading on levels of support and resistance, the zones of increased activity are formed. Traders make deals most often in such zones, and that's what the Pivot indicators search for. At such intervals, it becomes possible to obtain the strongest and the most reliable signals, and, accordingly, the chances of a successful transaction making increase.

The Pivot S/R indicator displays the Pivot levels as a stepped line, which makes it easier to read. This tool allows you to determine the most profitable points to open and close the positions, to install the stop-losses, and also prompts the points of a possible trend reversal, or the origin points of the trend.

To understand how the indicator works we will take a closer look at the Pivot levels.

In the world of financial markets, the reversal points of the price are called Pivot Points. Many trading strategies are based on such points, and the application method has been developing since the 1930-is right to this day.

Identification of the levels is based on several formulas:

P is for Pivot level;

R is the resistance;

H and L are the maximum and minimum prices on the selected time interval;

C is the value of the asset at the moment of closing the position.

Thus, within the classic use of the Pivot points, the chart is divided into several levels of support/resistance. A trader searches for breakdown points and price reversals. It should be noted that if the price reaches the levels of S2, R2, S3, and R3, it means the market is overbought, and these points should be used only to exit the trading positions.

A good moment to enter the market is a price movement above the support center, towards the R2, breaking through the R1 level. In this situation, the trader can open a position at the R1, waiting for the intersection with the next level. If the price continues to move, the position may be partially closed at the R2, with the final goal at the point of R3.

If the price doesn't break through these levels, the trader should open the positions at the time of the price rebound from the line.

The number of levels is unlimited in the Pivot S/R indicator. Due to the automatic calculation and drawing of levels on the chart, the new pivot levels are aligned in the price movement direction, and the trader can work on any time intervals: 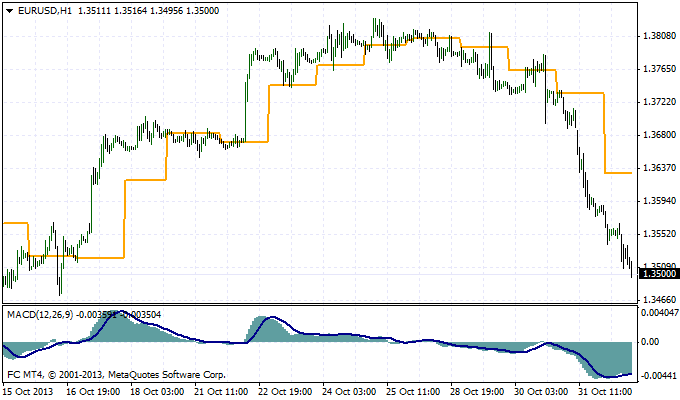 Nevertheless, the practice shows that the Pivot S/R provides the most efficient indications on medium and short time frames.

Trading with the Pivot indicators, traders are guided by events such as a breakdown of the level and a rebound from the level. If there is a level breakdown, a trader should wait until the price re-interacts with the line again. Afterward, it is appropriate to enter the market. This method is weighed, and safer than the instant reaction to the first level testing. If a trader is a novice, then he should always stick to this method.

Such a careful use of the levels can cause a trader to miss a sharp trend movement when the price doesn't stop and doesn't rebound of the levels. At the same time, in the case of a breakdown at the Pivot level price with the rollback, the position won't be closed by a stop-loss, and the trader will avoid losses.

Using the Pivot Levels as the resistance and support lines, their strength is determined to depend on the number of price rebounds. The more often the resistance line is tested, the stronger is the level. In this case, the trader carries out the normal trading within the range:

The Pivot S/R indicator is one of the most convenient tools for the Pivot levels. It determines their location automatically as well as displays the data in a convenient form of a step chart, which facilitates the visual perception and speeds up the trader's work.

This indicator generates the signals with high accuracy. However, just like all the similar instruments, it's not safe from the possible false indications. For this reason, it's recommended to use the Pivot S/R indicator along with other tools to filter the readings.