Bollinger Bands is an oscillator indicator that displays the level of the market volatility. It allows determining the price level, relative to the moving average over a recent period. This tool makes it possible to forecast the growth or fall in price, which helps a trader determine the right moment for a successful purchase or sale.

How do the Bollinger Bands work?

The Bollinger Bands work is based on the oversold and overbought markets. Visually, the data is displayed as three lines, where the middle line is a simple moving average, and the upper and lower ones are the levels where the price is considered higher or lower than the moving average. 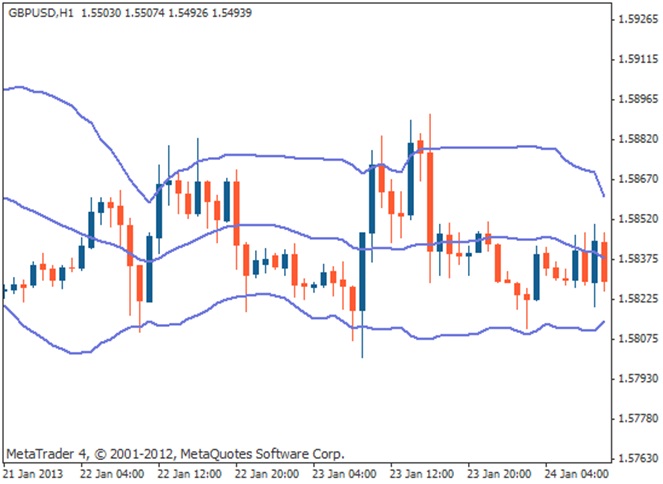 The top and bottom bands serve to predict the price reversals because the main dynamics occurs within their limits.

It should be noted that the price movement towards the lines can't be a guarantee of a further reversal. If a trader wants to avoid possible losses, then he should check the another technical indicator, and open a deal if the forecast is confirmed only. The trend indicator would be a perfect pair.

Along with determining overbought and oversold assets on the market, the Bollinger Bands indicator is often used by traders to measure the market volatility. In this case, working with the indicator is extremely simple - the longer the distance between the bands is, the higher is the volatility level. 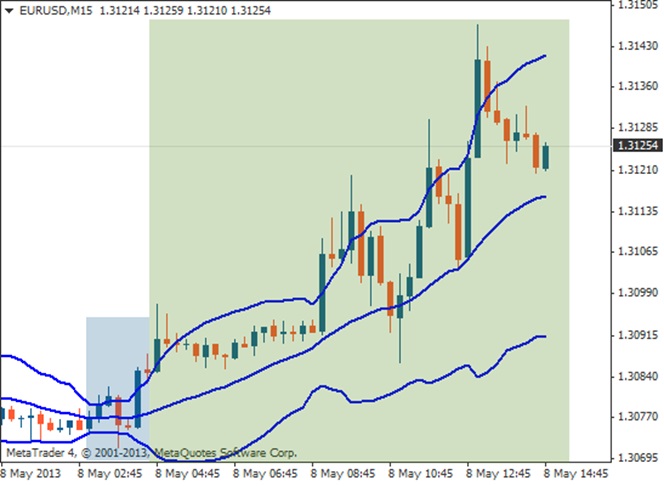 In the Bollinger Bands settings, two main parameters allow controlling its operation - the period number and the standard deviation value.

The period means the time interval, on which the indicator makes calculations. By default, the Bollinger Bands are calculated over 20 periods.

John Bollinger, the author of such a tool, recommended the following period settings, depending on the time frames:

As the standard deviation increases, the distance between the central moving average and the outside band's increases. Thus, the price moves within limits set by the upper and lower lines and less often breaks the boundaries. By increasing this parameter, the trader gets the opportunity to effectively set the extremum points that the price should reach to break through the bands. It is also worth noting that when the standard deviation increases, the breaks of the bands are less frequent, which means that the indicator signals become more reliable.

Forex trading using the Bollinger Bands is a bit similar to working with the moving averages.

The Bollinger Bands is a standard Forex indicator, which's hard to overrate. However, just like all the oscillator indicators, it needs to be tuned properly so that a trader could avoid the false signals. Also, it's worth to remember that making transactions based on the single indicator, involves a high risk. Therefore, we recommend to use this tool along with another indicator, which will help the trader to assess the market situation better, and to make the right decision.