Wolfe Waves is a popular trading strategy for the Forex market, which requires no indicators. It consists of searching for a particular pattern on the graph, which signals an early reversal of a bullish or bearish trend. With the help of the Wolfe's tools, you're able to identify the most advantageous points for entering the market, to make the trade transactions. Further, we will consider this wave analysis.

Wolfe Waves - the principles of work

Bill Wolfe, who was a professional trader and analyst, created the strategy based on Newton's first law, which states that every action always has its opposition. He suggested that the market moves like a pendulum - there is a rollback after every price pulse. This theory is a base of all the wave strategies. You can find more information about them on the MTDownloads website.

According to a lot of traders, Wolfe Wave formations are the most accurate of the reversal patterns. They are particularly efficient because the formations of a pattern are easy to recognize since they have the apparent characteristics. Let's see, how to identify the Wolfe Waves on the price chart.

The picture below shows a bullish pattern. Each wave formation has its numbering and performs a specified function in the analysis. 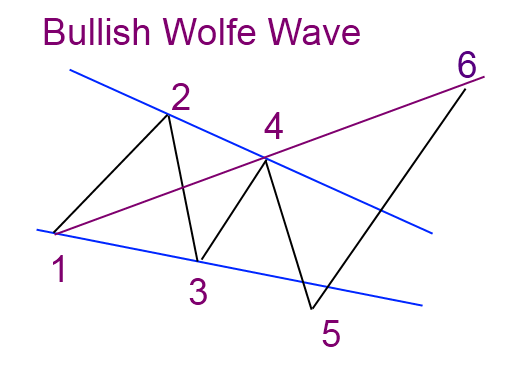 The formation of the pattern begins at the point 1, and the 1-2 segment is the base of the model. Mark 2 is the first peak of the pendulum movement of the price. In this model, it's always above the mark number 1.

Then the price goes down to the point 3, which is sure to be lower than the first one. After that, a new 3-4 wave is formed. The point 4 is the maximum value of the price in this part of the pattern. It cannot be above the point 2 or below the mark 1.

Point 5 is the minimum price in the Wolfe, bull model. If you draw a straight line the points 1 and 3, it will necessarily pass through point 5. The appearance of such an apex indicates that it's time to enter the market.

It's necessary to close the position when the price reaches the mark 6. To find it, you must draw a straight line through the tops 1 and 4 - point 6 will be on this line. In the bull pattern, wave 5-6 is the only one to trade.

The essential condition for the correct identification of the bullish wave pattern, are the tops 1-4-6 placed on the same straight line as the 1-3-5 marks.

Bearish waves (Fig. 2) appear when it's worth to enter the market on short positions, closing the orders for sale. The principles of such a pattern formation are as follows. 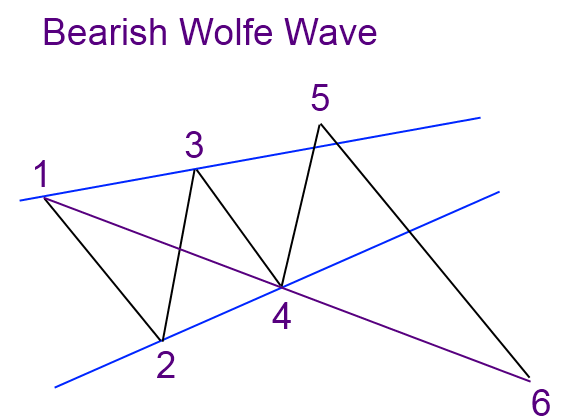 Point 1, just like in the bullish type, is the beginning of the pattern formation, and the 1-2 segment is the base of the model. Mark 2 is the lowest price in a particular sequence of the Wolfe Waves.

In the bearish type of the wave, the 5-6 wave is also the most important. Reaching the price of point 5, which will always be the highest price value on a particular segment of the chart, indicates that it's time to open the short positions. To find the point 5, you need to draw a straight line through the tops 1 and 3. The mark five will be located on this line.

When the price reaches the six mark, it's time to close the trading positions and exit the market. The confirmation of the bearish Wolfe Waves appearing are the points 1-4-6, as well as the tops 1-3-5, placed in line, just the same as for the bullish pattern.

As you can see, everything is quite simple. However, it should be taken into account that the “pure” Wolfe Waves are rarely formed. The intermediate points usually appear between 1 and 4, which can easily be taken as the desired point. In this case, it's hard to find which of the prospective points to draw a straight line through, searching for the point 6 location.

To solve such a problem, you can use the stop loss order and the trailing stop function. The trailing stop will move forward after each price reaches one of the six marks, increasing your profit. A stop-loss closes the position immediately if the price goes the other way.

Advantages of the Wolfe Waves strategy

The trading strategy based on the Wolfe Waves is quite simple to understand and has clear rules for entering and exiting the market. For this reason, it's quite useful, in case the trader will adhere precisely to the rules of patterning. Some newcomers tend to "think out" the patterns that don't exist, and sometimes this has a terrible effect. The Wolfe Waves analysis requires the strict adherence to the instructions, with no amateur performance. Moreover, this is the main advantage of such a system.

Also, unlike the other Forex strategies, this wave analysis doesn't require the additional technical analysis tools for checking the pattern signals. It makes it possible to clean the chart of the bunch of the indicators and see the clear situation on the market.

Thus, Wolf's wave strategy is a powerful technical analysis tool, which is very efficient. You can check it by downloading the Wolfe indicator on the MTDownloads website.