The DeMarker indicator is a technical indicator of the oscillator type, which is used in the market analysis including the Forex market. The author of such a tool, Thomas R. Demark, described it in his book "The New Science of Technical Analysis." The author's intention was to develop an indicator of the overbought and oversold zones, relieving it of the most shortcomings of such tools. This indicator determines the potential maximum and minimum points, basing on the level of the demand for the asset, and determining the risk degree for buying and selling the asset. The DeMarker indicates the depletion areas of the price, which appears while the areas of minimum and maximum are forming.

How the DeMarker indicator works

The operation of the Demark indicator is based on a comparison between the maximum for a given period and the previous maximum. At the same time, this indicator is an oscillator with the value from 0 to 1, with the main points of 0.30 and 0.70. 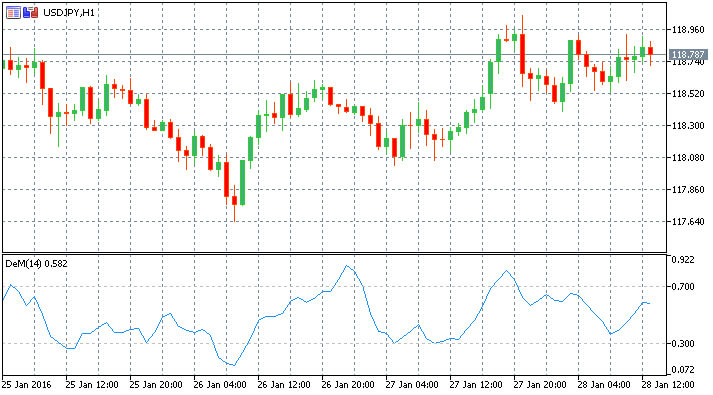 If the maximum value of the candle is higher than the maximum of the previous one, then the instrument will record this difference. If the maximums are equal, or the new value is less than the maximum, the indicator will show zero, since the operating mechanism doesn't support the negative values.

m is the current candle (respectively, m-1 is the previous one),

N is the period,

SMA is a simple moving average.

Just as many other oscillator indicators, the DeMarker shows signals of two types - enter and exit of the overbought zones, oversold zones, as well as the divergence.

In the case of a new minimum, which is less than the last minimum, while the indicator also signals a new low, higher than the previous one, this means the downward trend changes to an upward. This type of divergence is called "bearish."

The chart of this indicator can also display both double and triple divergences - in this case; it's worth considering the signal as a stronger one.

First of all, this indicator is easy to use. You don't need to have any special skills to understand that the price will turn up below the 0.30 mark, and, respectively, go down above the 0.70 mark. Moreover, if the experienced trader uses such an indicator as part of a strategy; it would make the unexpected profit. Within the correct use, the efficiency of such a tool can reach 90%. With the help of classic patterns, the indicator filters out false signals quickly.

Nevertheless, just like with any other oscillator, a trader shouldn't rely on signals of the single instrument. The false signals probability increases when the length of the trading cycle and the range of the indicator don't match, as well as at the beginning of the trend. Many traders show excellent results of using the DeMarker along with the Range Expansion Index (REI), which was developed by Mr. Demark too. Also, it's worth to use the DeMarker along with the Scholastic indicator.

The DeMarker indicator is rightfully considered a compromise between the technical and fundamental analysis types. Within the correct use, the indicator allows you to minimize risks making transactions in a trend. The beginning traders should read the"The New Science of Technical Analysis" book, where the author analyzes this tool more detailed. It's also worth to start trading after a good practice only.