Swing Strategy is a trading method in the Forex market, which is very popular among traders. It is enough to evaluate the price chart visually, to notice that fluctuations of the asset prices are similar to a pendulum moving up and down.  Swing Strategy is based on this simple principle. The developers claim that this Strategy provides a good steady profit. In this article, we will consider the basic rules of Swing Strategy in detail.

In Swing Strategy, trading is carried out on the trend. Also, attention is paid to particularly strong tendencies. Technical analysis is based on a MT4_GANN_H4 indicator. It has many common features with other Gunn’s tools, which are very popular in the Western hemisphere. The indicator is easy to install in the MetaTrader terminal, following the standard installation algorithm. The indications are displayed in the form of a curve, which changes its color depending on the prevalence of Bulls or Bears. The blue color means an upward trend, the red one – a downward trend. It is worth noting that this algorithm has certain downsides. For example, the trend changes with a delay relating to the color change. Also, the MT4_GANN_H4 indications are often redisplayed.

Taking these facts into consideration, Swing Strategy can seem insecure. However, if the strategy is improved, it will yield a profit. For that, you should not use the reverse signals and correctly set Stop Losses.

The Setting of the Indicator

Trading according to Swing Strategy 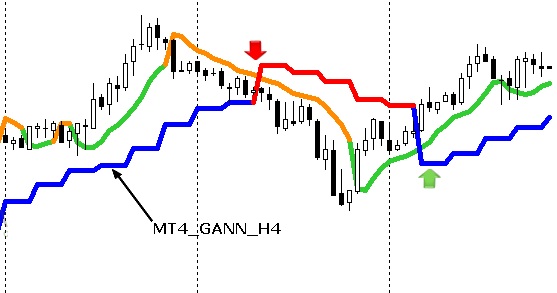 You need two timeframes: hourly and four-hour. As it was mentioned above, the direction of the asset price on the H4 is indicated by red and blue colors, on the H1 timeframe these colors correspond to orange and green ones. We recommend using currency pairs, which demonstrate a high volatility, and choosing the time when they are traded as actively as possible. For opening a Sell order by Swing Strategy, the following conditions should be met:

It is evident that opening a Sell order by Swing Strategy is carried out according to the opposite algorithm. As for limiting the losses, this method involves two methods of the Stop Loss setting:

Whatever method is chosen, we recommend keeping the distance between the position and the Stop Loss, equivalent to 30-55 pips.

Additionally, many traders recommend placing restraining orders below the trend indicator’s line on a long timeframe. In this case, Swing Strategy works more efficiently, since you decrease chances on an accidental triggering of a Stop Loss.

The developers of Swing Strategy recommend following a fixed Take Profit at 150 pips. However, you can change its value depending on the volatility of chosen currencies.