Forex Strategy with No Indicators

Some traders, searching for the great profit, set a huge number of indicators, cluttering up the entire space of the terminal, and probably losing the sight of the price schedule. But don’t forget that any indicators give false signals, and the more technical tools are used, the higher is a risk of the erroneous transaction.

Most experienced traders, who studied the basic fundamental and graphic analysis of the market, use strategies with no indicators, along with the regular methods. In practice, such forecasts turn out to be much more accurate, as you analyze the clear price dynamics, with no influence of the complex processing algorithms.

Types of Strategies with No Indicators

Trading on the News

For example, there’s a release of data on the US trade balance expected. You can see that all the media publish the negative forecasts. In this case, you can open a sale for the USD, even before the release. Obviously, the downward trend will appear on the market.

Traders, waiting for the important economic news, usually affect the market even more than the information itself. And you, in turn, can benefit from the traders’ mood.

In addition to the use of the technical analysis tools, levels can also be identified visually. For example, if the price reaches the mark of 1.2500, and continues to move to 1.2600 - then we can expect the situation to repeat. The deal is less risky if the price is far from the minimum or maximum value.

You just need to open an order against the trend direction, then set the stop loss and take profit points, and wait for a new price correction.

It’s worth noting that the take profit shouldn’t be set further than the previous rollback level.

Analyzing the price chart, a trader looks for certain figures that are interpreted according to the established scheme. Some of the figures of the graphical analysis will be discussed below.

Obviously, it’s the most controversial method of trading. The trend is determined "by eye", and then an order is opened in the same direction. As soon as the price turns in the opposite direction, the position is closed. If the price moves in the right direction, the trader waits for the profit to increase.

Some Figures of the Graphical Analysis

These figures represent a pair of local minimums / maximums formed after a long trend movement. The position should be opened after the price made a second rebound, and crossed the internal local extremum of the trend. These peaks can be formed both by bodies of the candles, or by shadows. The stop loss is set below these points, or at the same level, and the take profit is at the level of the extremum located between the two peaks. You can also set the target twice higher.

The figures of a double bottom and a double top are easy to recognize even for the beginner, which makes them a convenient tool for trading without indicators. 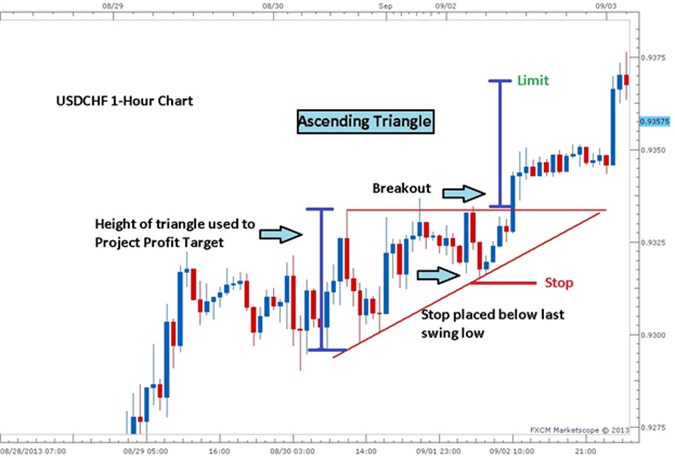 This pattern explains the principle of "springs" - the amplitude of price fluctuations is gradually compressed within the triangle, so it can break through the boundaries with a strong impulse, any time.

In this case, pending orders are placed outside the triangle. As soon as the first order is triggered, the second one is removed and replaced with a stop loss. The take profit level is determined by the width of the triangle, as it’s shown on the figure above. 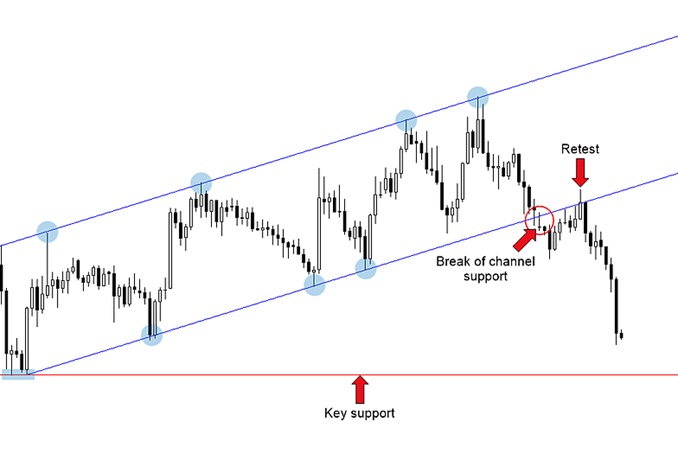 In this case, the points of maximum and minimum, form parallel lines. Just like the triangle, this figure can be either ascending or descending. You can trade both on the breakdown of the channel in the trend direction, or on the price turn as well.

After the price breaks through the channel and then tests it again, you need it to move beyond the previous high / low. Then you enter the market. The stop loss is placed at the extremum level, or on the height of the channel. The take profit is set the same way.

With a good training and strict adherence to the rules, any trader will be able to improve his trade, using strategies with no indicators. Such a trade allows a trader to better understand the nature of the market.