Leverage in Forex - What Is It?

Leverage is a broker's capital given to a trader to increase the profits. Trading on the Forex market, a trader can borrow broker’s money, to open the transactions of a much larger volume than his real deposit allows.

When using the leverage, it’s important to remember that the risks of such operations grow in direct proportion to the increased profit. Therefore, brokers limit their losses, closing all the positions of a trader, as soon as the drawdown from his transactions has grown up to the amount of the deposit.

Principle of the Leverage

When a trader opens a position, his profit or loss depends on the movement of the price:

In this case, some profits and losses are measured in points that correspond to a fixed sum of money.

When determining the value of a position, the concept of a standard lot is used, which is equal to 100,000 monetary units. If you open a deal for one lot, using the US dollar in quotations, its value will be equal to USD 100,000.

Apparently, not all the traders can operate with hundreds of thousands of dollars. That’s why the leverage is used. A broker gives a certain amount of a loan, but it doesn’t go to a real deposit. You just see how the value of the item increases, and so increases the possible profit or loss. 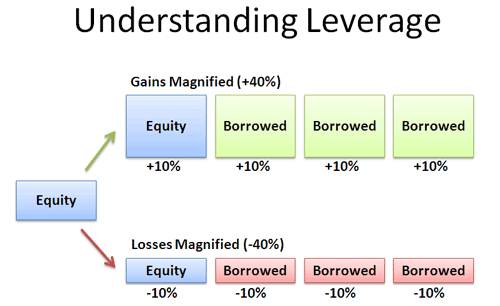 To get the leverage, you need to have a certain amount of money on your account, as a guarantee. It’s called margin. Such a figure varies depending on a broker.

Also, the amount available for a trader varies. The size of the leverage is expressed as a proportion, for example, 100:1. Such a value means getting 100,000 dollars per 1,000. Also, the maximum value is used, which can be up to 500:1, depending on the chosen broker.

Beginners often forget about the money management, risking too big amounts, and focusing only on the trade balance. Such errors can lead to a rapid zeroing of the deposit. Suppose the trader's balance is 1,000 dollars, with a leverage value of 100:1. Then one item of the position opened will be equal to $10. If he places a stop loss at a distance of 10 pips from the opening point, in the case of its triggering, he will get a loss of $100, which will be equal to 10 percent of the total amount of the account. Obviously, such a practice is unacceptable.

Traders, who pay proper attention to the money management, protect themselves from the risks associated with borrowed funds.

Remember that the risk of the transaction shouldn’t exceed 2 percent of the balance, regardless of whether the leverage is used. If the trader from the example above used a leverage of 10: 1, then the loss from one point of the deal would be only $1. Thus, if the transaction is closed with a stop loss at 10 points in the opposite direction, the loss will be only $10, which equals 1% of the trade balance.

Understanding the simple rules of money management will save you from significant losses, no matter how much money you borrowed from the broker.