Prometheus Strategy is based on the theory of the “market traps” – sharp unforeseen price changes. That is, when trading in the direction of the trend, most Forex traders will open corresponding orders if the trend in the market is stable. However, if the price abruptly reverses, they can bear losses.

The system is committed to predict reversals and trade against the strongly marked tendency. In fact, when the majority of traders enter the market following the method, you should open countertrend deals. That is, in the opposite direction against the crowd.

The advantage is the possibility of using Prometheus Strategy with any currency pairs, regardless of timeframes. Trade is conducted with pending orders.

In spite of the multifunctional system on various timeframes, you can get the highest profit on the М15-Н4. That is, it is safe to say that Prometheus Strategy is intraday. This is because the method is based on another Forex strategy – VSA, which is also intraday.

Usually, the quotation varies significantly, when the participants with big lots enter the market. The authors of the strategy claim that you need to trade like these participants since large numbers of traders cannot be wrong. To understand the deals of which direction you should open and how many, use the teak volume indicator.

Trading on Prometheus Strategy, it is important to track the volumes at the peak of the market and open corresponding orders. We will tell you further, which ones.

Open a Sell Limit order when:

The situation above indicates the entry of the price into a narrow price range after the directed movement. You should set the position at the High level of the first candle.

Place a Buy Limit order if the conditions, reflecting the mentioned above ones, are met. That is, look for a bearish candle with a long body, after which there is a candle with a short body. At the same time, the indicator should show a white column. Open the position at the High level of the first bearish candle.

Set a Stop Loss at a distance of 30 pips from the point of placing the order. The Take Profit should be equal to two Stop Losses. 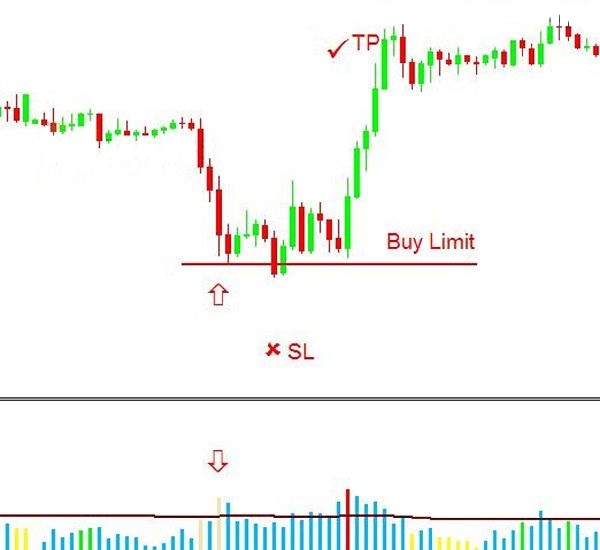 If you open an order and see that the price level has a small dynamics, follow the rule of five candles. It states that you should close the deal after the closing of the fifth candle, no matter, with which result.

Intraday trading should be taken particularly serious by novice traders. Do not set orders during a half an hour after the release of the important economic news. It provokes a gap, and you will go into the red. Also, refrain from transactions 30-40 minutes before the important announcements, since traders can actively sell or buy currency, based on the forecasts.