The Reasons of the Spread Expansion Spread plays a significant role in Forex trading. It is the difference between the bid and ask prices of a currency pair. This amount is taken from the trader with each transaction.

There are two types of spreads:

The size of the second type can change, and many traders forget about the possibility of its widening. It leads to losses.

A floating type is profitable for a trader since it can be used with the minimum values. Some brokers may set a spread of 0.2 pips, but such values are possible only with pairs with low volatility when the market is in the flat state. The flexible size of the spread can also have its drawbacks: it can grow unpredictably at any moment. 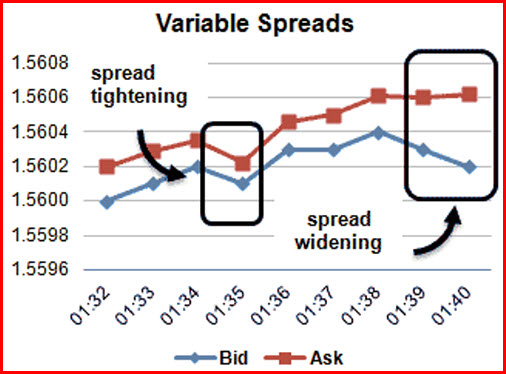 Scalpers get the biggest losses from such an expansion since they trade the small positions. In this case, the possible profit from the transaction may be less than such a difference.

This value often changes after the releases of important economic news, as a result of a surge in volatility. As a rule, even 10-15 minutes before the news release, and after its publication, the bid/ask difference increases by 10-20 pips. Increasing this figure, brokers ensure their traders from a lack of liquidity.

In general, there are following factors affecting the size of the spread:

The Effect of a Wide Spread on Trading

The increase in this figure has a negative effect on the stop orders.

For example, if you open a sell order and set a Take Profit, you should remember that the amount of the spread will be taken from the profits received. To earn the significant profit, you need to move the order higher, which automatically makes the transaction riskier. The higher the level of Take Profit is, the more likely the price won’t reach this point, turning in the opposite direction.

The same negative effect is for the Stop Loss orders. Thus, an increase in this parameter raises the risk and reduces the profit, both on long and short positions. Some traders believe that increasing the bid/ask difference affects only the sale transactions, but this is a big mistake. Increasing such a figure, any trading strategies, and any traders suffer.

How to Protect Your Trading?

It’s impossible to predict a widening. For this reason, there are no ways that would ultimately protect your positions from this risk. However, some methods minimize the losses.

If your type of trading depends on the spread much, and you suffer significant losses, then it may be worth changing the strategy. For example, try to open the longer positions.