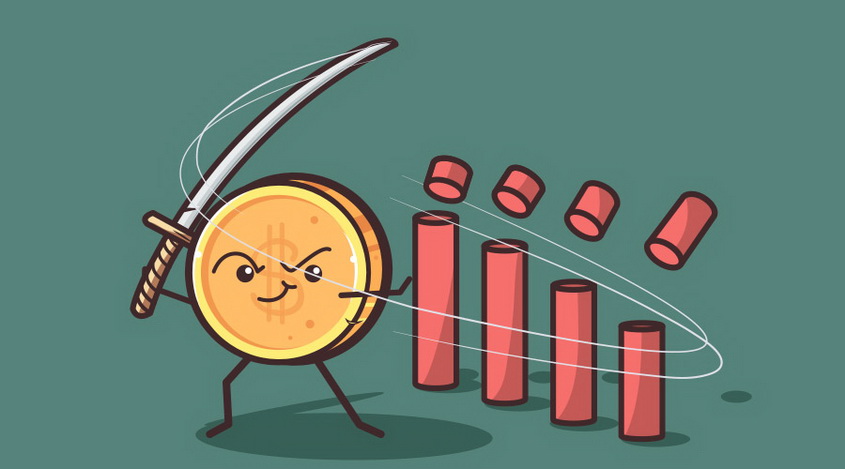 Japanese candlesticks are a kind of the price chart that was born in Japan in the middle of the XVIII century. Initially, this method of depicting the price dynamics was used on the rice exchange. The western traders started using candlesticks only in the late 80’s of the XX century, and now they are used by traders around the world, including the Forex market. The advantage of such a system is that each unit carries four types of data at once, specified by its size, length of shadows, color and position. Japanese traders also noticed that it’s possible to predict the further behavior of the price and the formation of demand. This system of candlestick patterns interpretation was called Kaisen.

The Construction of Candlesticks 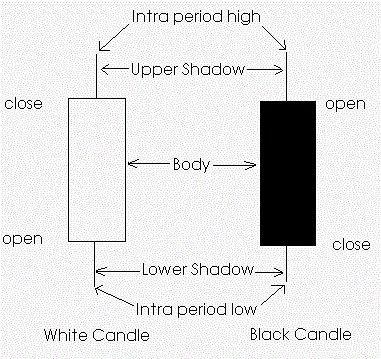 Each candle consists of a body and shadows. A color denotes its belonging to a bullish or bearish trend. The candles of the upward trend are white, and the candles of the descending trend are, respectively, black. The beginning and the end of the body show the prices which trades were opened and closed at. Candle shadows are the maximum and minimum cost of an asset.

If the bar has a long upper shadow and a short lower one, then bulls were more active during the trading, and caused a significant increase in value. However, then the bears entered the market, and began to sell actively, so the price returned to the opening level. Similarly, the long lower shadows and the short upper ones mean that in the beginning, the bears were more active, but eventually the bulls took the initiative, and raised the value of the currency pair.

We will consider a few basic patterns that are the most common ones.

This model has a short body and long shadows. In this case, a color doesn’t play an important role. Anyway, this pattern suggests that there was uncertainty after the active trading on the market. The forces have changed, and the price has moved just a little from the opening point, due to the battle between bears and bulls. There is often a trend reversal after the Spinning Tops.

Marubozu are the bars without shadows. These bars speak of the complete bullish or bearish control over the market. White bar means that the trades opened at the lowest price, and closed at the maximum. Black color means the opposite situation. Such candles often begin reversal patterns on the chart. 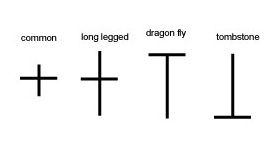 These patterns indicate that the opening price was equal to the closing price. Neither bulls nor bears were able to take the control of the market. There are different types of Doji: Dragonfly, Tombstone, Long-Legged Doji, etc.

When you see such a model on the chart, you should look at the earlier ones. For example, if the Doji appears after a long white candle, it means that there are more sellers on the market, and the control will go to them soon. However, don’t open the positions when the first Doji appears. Wait until the new candles appear on the chart, confirming that the trend has turned.

Hammer is a bullish trend reversal pattern, Hanging Man is a similar bearish pattern. These patterns feature the very long lower shadows. Upper ones are shortened or completely missing. The body is also small in length.

Such patterns could mean that the price has reached a level of support or resistance, and the trend will turn soon.

Inverted Hammer and the Falling Star 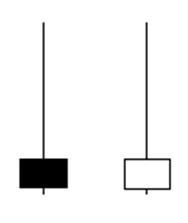 The Inverted Hammer is a bullish pattern; the Falling Star is a bearish one. Both of these models also forecast a reversal, but it’s worth waiting for the confirmation from the next candles before opening a deal. 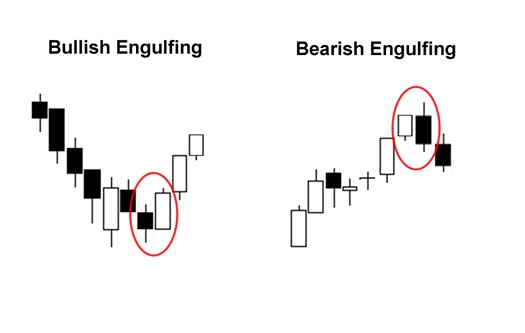 In this case, you can see how the range of the new bar completely includes the previous bar of a different color. As a rule, after such pattern, the asset value begins to move fast in the opposite direction. 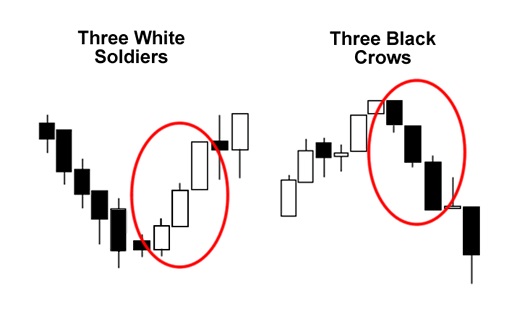 Such patterns are considered the most reliable signals of a turn. Obviously, three large candles of the same color speak of a significant superiority of bulls or bears.

Candlestick analysis can be used in conjunction with other trading strategies. These patterns are perfect for filtering the signals received from various indicators.