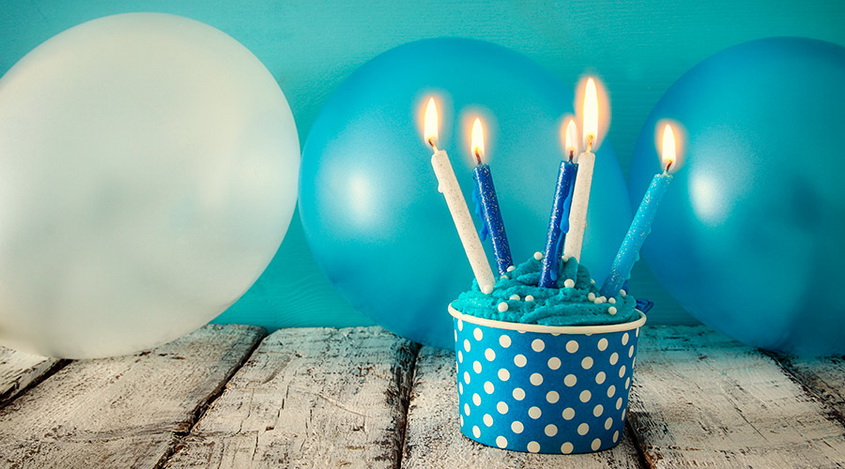 5 candles filter is a method that allows you to filter the false signals trading on the Forex. Thanks to this method, a trader can significantly reduce risks and increase profits. It can be used within any trading strategy.

The financial market has a certain "memory". The newest trading signals are the most truthful ones. This is due to the fact that many factors influence the market every minute, which can change the value of the asset drastically. Signals received a while ago, are rapidly losing relevance, and so they are less suitable for trading.

According to many experienced traders, every trading signal needs to be checked within five new candles.

Suppose there’s a bearish trend on the price chart, and you look for the price correction to open a sale position. 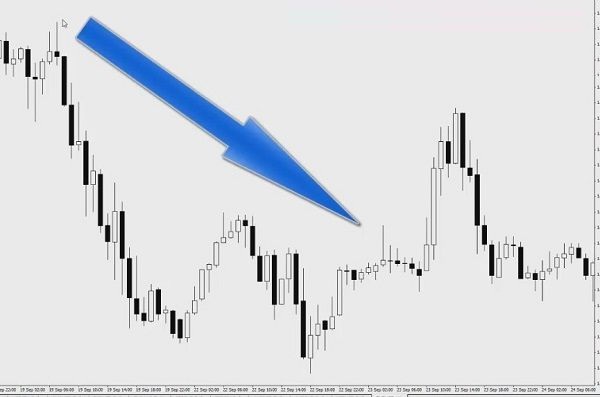 While the value of the asset makes the correction, a pin bar appears on the chart. 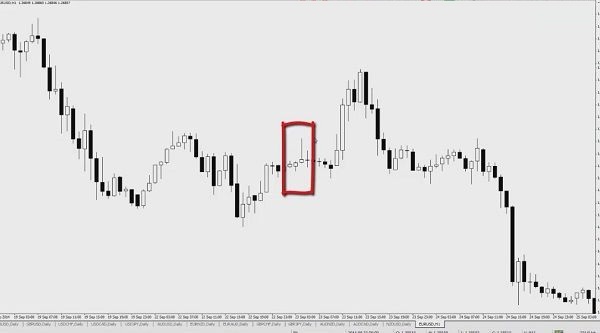 You open a warrant for sale on this bar, but you see that the price doesn’t change for the next five candlesticks. This means that the signal was weak or traders couldn’t affect the price dynamics in any way.

In such a situation, if you close the deal before the sixth candle appears, it will help to avoid the losses.

This approach should be used only for when the price doesn’t show any noticeable dynamics after the signal candle. Obviously, you shouldn’t wait to close the order, if the value of the asset turns sharply in the opposite direction.

It’s also necessary to consider another situation, where the price chart turns in the right direction after 5 new bars. Sometimes the market may not react to the signals for some time, influenced by the external factors, and then continue the predicted movement.

Nevertheless, according to statistics, this method really helps to reduce the losses from the trading significantly.

Features of the Method

This filter isn’t suitable for all the time frames. It shows the best results on timeframes like M15 and older. The application of such a method on M1 or M5 periods is as meaningless as the use of candlestick analysis.

Let's take a look at a new example where trading is made when a weekly gap occurs, on the H4 timeframe. 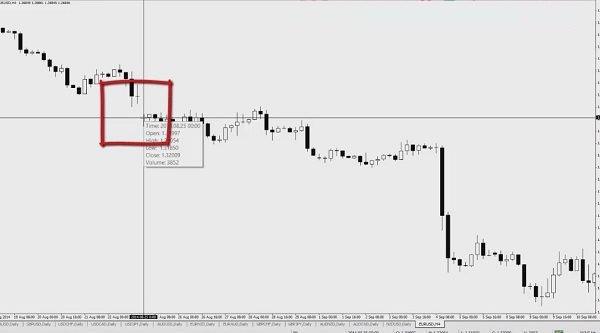 Trading on the gap is based on the expectation that it will close. According to statistics, weekly gaps close in 70 percent of cases. In our case, a trader can expect the price to move upwards, and so open a purchase. However, after waiting for the fifth bar to close, we see that the price has increased by only 10 pips, which is almost invisible on the timeframe of H4. According to the five candles rule, this deal should be closed.

As we can see on the graph, this gap didn’t close, and further, the bearish trends dominated the market. If the purchase wasn’t closed in time, it would lead to the closing by the Stop Loss order. Obviously, the described method allowed us to avoid losses.

Let's consider one more example. Suppose there’s a bullish engulfing pattern on the price chart. In such a situation, it will be logical to open a deal for purchase. 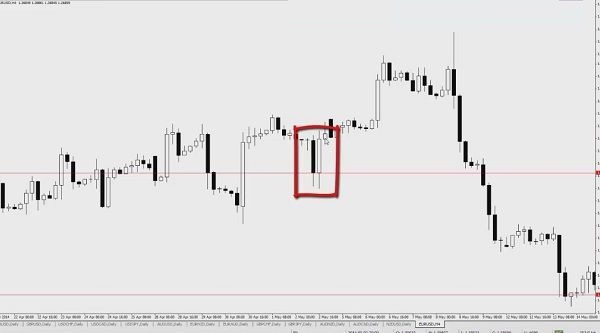 Further, the value of the asset continued the lateral movement. But, despite the absence of the strong fluctuations, there was still some activity on the market. It’s necessary to pay an extra attention to such situations. Obviously, this method of filtering should be used only if all five bars showed the lateral movement. If you analyze the chart for a few days, you will see that such situations are relatively rare. Therefore, the five bars method shouldn’t be considered a universal filter, because the certain conditions are necessary for its operation.

In this case, the chart showed the traders’ activity, which means that the five candles filter cannot be used in such conditions.

This method is extremely simple, and the Forex beginners can use it easily. The horizontal price movement for five bars from the moment of the signal receiving indicates a false signal. In this case, it’s better to close the deal, and fix a small loss or profit.

As already mentioned above, this method can be combined with almost any trading strategy. However, we recommend testing it on a demo account before starting using it in real trading.