Tic-Tac-Toe graphical analysis method has been known since the end of the XIX cen. It was described in details by Thomas J. Dorsey in his same named book. This method is distinguished by its simplicity and clarity. Previously, it was actively used by stock brokers to forecast changes in the share price. Today this method is used lesser due to modern types of analysis. However, tic-tac-toe is still considered as one of the most accurate ways to determine price trends.

The tic-tac-toe diagram is a combination of vertical columns denoted by crosses (X) and zeros (0). The X-columns correspond to the price increase, and the columns marked "0" - fall. One column necessarily contains only one kind of sign: either crosses or zeros. At the same time, time is not taken into account. Value is only significant price fluctuations. This is the main feature of the tic-tac-toe charts.

This method of graphical analysis was at its use at the end of the XIX century. There were any ideas about computers, so the schedule was built on a regular sheet of paper. For this purpose, a reference point and two quantities were determined:

The common size of the cell is 10, and the rotation factor is 3. However, these values ​​may differ depending on the selected asset, time interval and other analysis parameters.

Thus, if the price of the asset has grown by 12 points over the period, one cell with a cross is formed. But, if the price change is only 9 points, we ignore this movement and wait for more significant one. This continues until the price turns into the required number of points, which is equal to the size of the cell and multiplied by the reversal factor. In our case, this value will be equal to: 10 * 3 = 30. That is, the price should be turned by 30 points to form a new column with zeros. 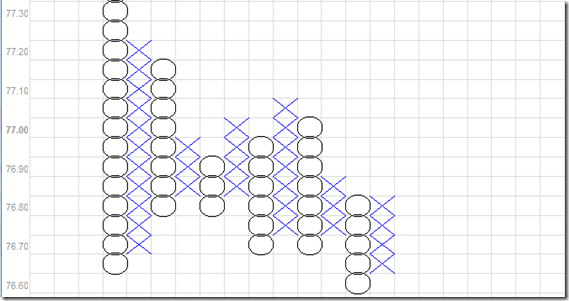 Price fluctuations, which are smaller than the specified parameters, are ignored. A trader can focus on the main trends, discarding market noise. This is the main tic-tac-toe chart advantage.

The tic-tac-toe chart takes into account only significant fluctuations in the value of the asset, so its signals are highly accurate. The basic sign that indicates the emergence of a new trend is the formation of the first zero after a series of crosses and vice versa.

However, this does not give us full confidence that the revealed trend is strong enough to continue further. More accurate results of the analysis are obtained by searching for patterns based on breakthrough support and resistance levels. The most famous patterns on the tic-tac-toe chart are:

Double top / double bottom. The "double top" pattern is a signal to buy. It is formed when the column X is at least one cell higher than the previous one. And, between them there is a column with zeros. The "Double bottom" pattern is a signal for sales. It is formed when the current 0-column is one cell lower than the previous one. Between them is at least one X-column. 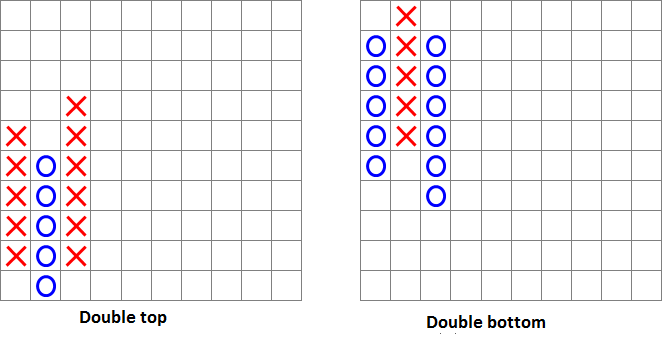 Triple top / Triple bottom. The appearance of a column that is at least one cell higher / lower than the previous two is a signal to action. This pattern is more accurate, since it indicates an obvious break through the support or resistance line. 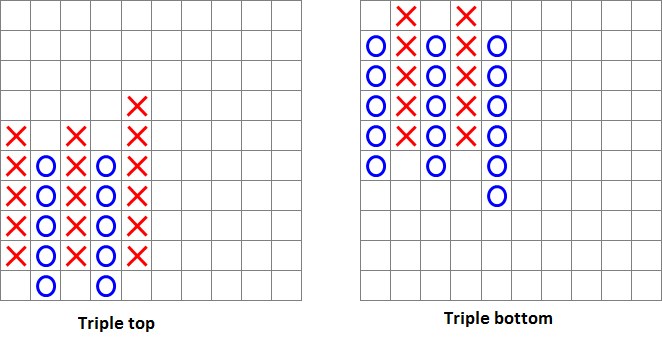 Symmetrical triangle’s breakthrough. If the breakout occurs up on the X-pillar, this is a signal to buy. When the symmetry of the triangle is disturbed by the formation of the 0-column moving downwards, it's time to open short positions.

Bullish catapult / Bearish catapult. Patterns resemble the Ascending Triangle/Descending Triangle technical analysis figures. We form long positions when we break through the parallel side of the triangle and form short ones when down. Break the 45 degrees line trend. This line is an inclined support or resistance level. In case of its penetration down there is a signal for sale, upwards - for purchase.

These patterns are based on the simplest technical analysis tools like support / resistance levels, trend lines. Even a beginner can master them and many traders begin to get acquainted with the charts by using this method.

Now almost no one is engaged in plotting crosses and tacks manually on a sheet of paper, as it was 100 years ago. This routine work is easily performed by the MetaTrader4 indicator "Tic-Tac-Toe”. The trader can only set the necessary parameters and watch the movement of the price searching for reversal patterns.

However, this task can also be entrusted to automated systems like trade advisors, who will form positions for buying or selling in accordance to identified signals.

Technologies significantly facilitated the process of trading in financial markets. However, a huge number of other technical analysis tools appeared at the same time. Sometimes their prognoses are completely opposite, which only confuses the trader. In this situation, it is worth paying attention to simple ways to determine the trend. The graphic indicator of crosses and toes is one of them.